Motivation Is Our Drives.....

A Computer Business That Gives Back Through Tech Upgrades

It was not a good time for Miguel Torres’ 4-year-old computer to give up the ghost. Torres, owner of Proremodels, a West Jordan, Utah, home remodeling company, was already strapped for cash when his computer conked out.

He poured $300 into repairs; it crashed again, and he couldn’t afford to replace it. He got by on borrowed computers, but his tech problem was hobbling his business, leaving him unable to answer e-mail, issue estimates or create invoices in a timely manner. “It was a really bad time for me,” Torres says.

One of his clients learned of his situation and introduced him to inQuo, a Salt Lake City-based computer repair shop. The company, founded by Lance Goodsell, had donated several computers to individuals and nonprofits in need. A few weeks later, inQuo employee (and donation program founder) John Stewart went to Torres’ house to set him up with a refurbished computer and printer and make sure the internet and e-mail programs were functioning so he could get right to work. 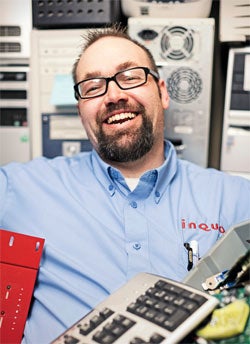 Stewart estimates the goods and services inQuo provided would have cost Torres about $2,000.

Stewart launched inQuo’s computer giveaway program when he learned of a local company that had several old computers sitting around after a tech upgrade. To keep them from being dumped in a landfill, Stewart and Goodsell took the computers and repaired them. Then, Stewart started donating the machines through a local nonprofit that helps refugee families resettle in the Salt Lake City area. “I spent time with the families. I got more out of that than I ever did running huge food drives when I worked for a corporation. It was so personal,” Stewart says.

InQuo has since broadened the program’s focus. They actively seek out recycled computers, as well as startups and struggling small businesses in need of equipment.

The four-person company’s biggest obstacle in expanding its donation program is time. College interns are doing the actual refurbishing these days, which gives them valuable experience while reducing the program’s costs.

InQuo doesn’t have set criteria when it comes to choosing companies that deserve donations. Recipients have included a student who wanted to start a Pampered Chef cooking business but couldn’t because it required a computer, and a co-op farmer who needed a laptop to track his yields.

Goodsell sees it as a tiny economic stimulus program for his part of the world. “I’m a believer in karma. What comes around goes around,” he says. “The more small businesses we can help, ultimately, the better the economy is going to be, which helps all of us out.”