Motivation Is Our Drives.....

From Utah To China: Meet The $2.6 Billion Fund That Invests Like Missionaries

When your day job involves traversing the globe from city to city, it’s not surprising that geo-tagging selfies for Facebook FB -0.95% gets old fast. But for Robert Gardiner and the globe-trotting analysts of $2.6 billion small- and microcap asset manager Grandeur Peak Global Advisors, updating and sharing their 6,175-row spreadsheet of international companies never gets old.

As he scrolls through thousands of entries projected on the wall of his Salt Lake City office, each one dedicated to a different obscure public company–from a bank in Bangalore to an energy firm in Calgary–Gardiner is beaming. “Nobody else is doing this much traveling,” he boasts.

This gigantic document, which Gardiner fondly calls the “touch tracker,” is at the center of Grandeur Peak. The 6,000-plus entries track every trip his team has taken to 59 countries over the past four years, prospecting for small- and microcap companies, and it records everything from meeting quality to whether a handwritten thank-you letter was sent.

Like many Mormons, Utah native Gardiner, 50, first encountered foreign cultures at the age of 19, proselytizing his way through France during the 1980s. In fact, 30 years later he and cofounders Blake Walker and Eric Huefner–also Latter-day Saints–make it a priority for their team to rack up millions in airline miles scouting new investments. “One thing you do as a missionary is you build relationships,” says Walker, 38. “You talk to a lot of people constantly and knock on a lot of doors.”

Though the U.S. has seen just a trickle of IPOs in the last decade, there has been a boom internationally–nearly 10,000. And given a general lack of analyst coverage in the emerging markets and the inherent volatility, foreign IPOs create a smorgasbord for intrepid growth hunters like Grandeur Peak. Since its inception in 2011 the asset manager has posted a 15% average annual return on its two largest funds, compared with 10% for the Russell Global Small Cap Index, swelling overall firm assets to $2.6 billion.

Grandeur is actually an offshoot of another successful Utah fund family, Wasatch Funds, founded in 1975 by microcap pioneer Samuel Stewart. Neighborhood friends, Gardiner and Huefner began working for Stewart as teenagers in the early 1980s. After school the pair would drive to Wasatch’s office, mostly to work on the firm’s spreadsheet of companies, performing tasks that ranged from reconciling account balances to devising a numerical rating system for each company. After his missionary work in France, Gardiner returned to Wasatch full-time in 1986 as a research analyst under Stewart, while at the same time earning degrees in physics and math at the University of Utah. “Back then small cap wasn’t even a category,” he says. “There was no Russell 2000 benchmark.”

After 25 years at Wasatch, Gardiner, who had run the highly successful Wasatch Micro Cap Fund (posting a 25% average annual return between 1995 and 2007), cashed in his chips and, with the blessing of his then 69-year-old mentor, formed Grandeur Peak. The new firm ultimately wound up with eight former Wasatchers. 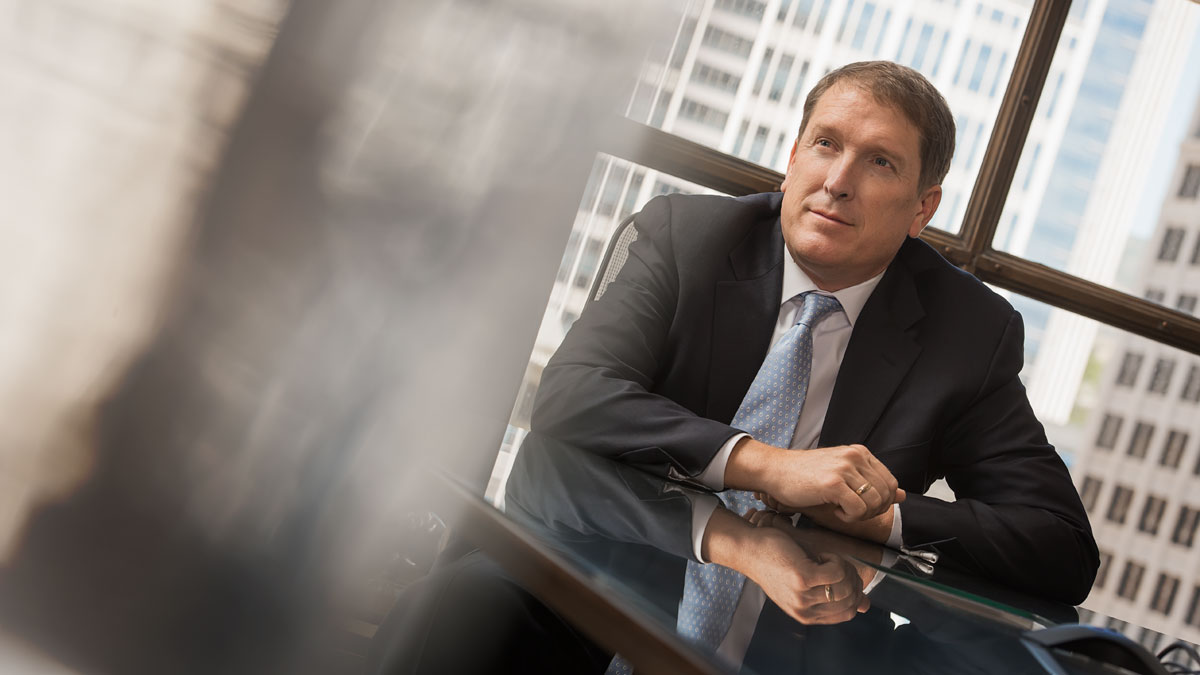 As with Wasatch, Grandeur Peak’s thesis is simple in theory: The world is full of underfollowed, undervalued small companies ripe for the picking. But in practice ferreting out the winners and avoiding the disasters isn’t so easy.

“You need to keep track of every company you’ve ever done analysis on,” Gardiner says. That’s tough to accomplish when your specialty is tiny companies in remote locations. Keeping track of all 3,500 firms is where Gardiner’s favorite spreadsheet shines. For every visit, fund managers and analysts alike must update the file and write a one-page memo detailing their trip.

A “Red Hot” tag denotes a company that needs to be looked at within a month, while “Watch B” means it’s worth monitoring but not ready for purchase. Many foreign IPOs that generate a lot of hype wind up on the Watch B list.

BBI Life Sciences, a Shanghai lab services company, is a good example of a Watch B. The stock rose after its Hong Kong IPO in December, but Grandeur was unsure about its business. It analyzed it, met with management and waited two months to buy in. Grandeur is already up 25% on BBI despite Chinese market volatility.

“When companies come public, underwriters make them look good, but six months later Wall Street moves on to the next hot IPO and these little companies just get forgotten,” Gardiner says.

In the case of Britain’s specialty pharmaceutical Clinigen Group PLC, Grandeur seized a Red Hot opportunity. “It was basically a dead IPO market in the U.K., and no one was paying attention,” Gardiner recalls. But the little-known company had a good record of acquiring and repositioning niche drugs forgotten by pharma giants. Grandeur bought in at the offering, and the stock more than tripled within 16 months.

Only about 450 stocks make it into one of the firm’s seven mutual funds. Typically Grandeur starts with a nibble and will increase its stake only after it gets to know the company better–or, as Gardiner puts it, “peels the onion.” No company represents more than 3.4% of any portfolio, and most account for less than 0.3%. Currently Grandeur’s Global Opportunities Fund is allocated 33% North America, 30% Asia ex Japan and 24% Europe, including the U.K.

Company visits are critical to the firm’s bottom-up approach. Amy Hu Sunderland, a Mandarin-speaking portfolio manager for the Global Opportunities Fund, was raised in Salt Lake City but is now based in Hong Kong. She recalls her 2011 trip to a rural village in Fujian Province in eastern China. She was looking at Singapore-listed China Minzhong Food, which on paper had a good return on capital and cheap valuation. But a visit to the company’s farms revealed a different picture. She noticed the farmers were picking fruit by hand–a sign of little technical support and low barriers to entry–which made it difficult to justify its stellar operating profit. “There was probably something funky going on with the accounting,” Sunderland says. The firm didn’t invest in China Minzhong, which went on to lose half its value within four years.

One novel perk for Grandeur fund owners is the shareholder letter’s “Notes From the Road” series, which contains diaries from analyst trips. Here’s an excerpt about a recent excursion to Karachi, Pakistan by portfolio manager Spencer Stewart, son of the Wasatch founder:

“Heading out into the busy Karachi streets I’m once again excited. Not only for the meeting with Atlas Batteries but for the drive through this perilous land. As we drive across town I’m surprised at the relative cleanliness and order. When I ask where the slums are, our broker points out some fairly rundown apartment complexes, I would have expected something quite worse. The most exciting part of the ride is when we pass a number of lots filled with hundreds of goats. Eid al-Adha (EID), or the Feast of the Sacrifice,’ is upon us, and the broker compares the goat lots to our Christmas tree lots in the U.S. …

“We arrive at the grungy-looking Atlas building and soon find out that the rough exterior is disguising a modern and newly renovated interior. The paint is fresh, and the air is cool and pleasant. I’m thrilled because on paper this barely $100-million-market-cap company appears to be a buy candidate. It’s been growing like a weed, is incredibly profitable and considering the valuation appears undiscovered.”

Stewart discovers that Atlas’ booming business has much to do with Pakistan’s substandard electrical grid and the people’s reliance on backup power from heavy-duty truck batteries sold by Atlas. The CFO noted that within a few years a China-backed power grid would cut demand. Atlas is placed on Grandeur’s Watch B list.

There is more to the Grandeur spreadsheet. It has an internal red-flag project: a 53-item custom checklist, from “Big Graveyard” (difficult industries like subprime lenders) to “Smell Test” (financial data don’t match common sense). One metric that Grandeur Peak examines closely is “days sales outstanding,” a proxy that measures collections on sales. The alarm sounds when companies have a DSO of more than 100 days. “Every time we make an exception, something goes wrong,” Walker says. He remembers 2014 portfolio loser Trigiant Group, a Hong Kong cablemaker with more than 200 days sales outstanding. A change of auditors is another red flag, especially when a company burns through two or more within a short period of time. “We’re constantly learning how to make the negative voices heard better,” Gardiner says.

Given the recent turmoil in emerging markets, no amount of diligent bottom-up research can completely insulate returns from giant macro trends like the recent sudden swoon of China’s stock market. Year to date, three of Grandeur’s funds have suffered losses, but the capital keeps flowing in. In fact, Grandeur has had to close several of its funds to new investors, including its original $650 million Global Opportunities Fund, because they’ve gotten too big. Two new funds, International Stalwarts and Global Stalwarts, look promising. Both will contain stocks that are larger than the traditional microcap picks, with market caps of $1.5 billion to $10 billion.

Says Walker, “We’ve had some graduates–companies that have gone from $200 million to more than $1 billion. You want to hang on to those graduates because their stories haven’t changed. They’re not in the 11th inning yet. They’re still in the 4th inning.”